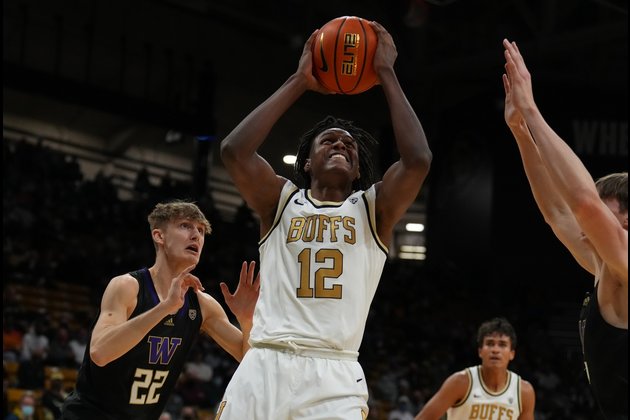 Two teams looking to move up from the middle of the Pac-12 basketball standings face each other Thursday night when Washington plays host to Colorado at Seattle.

Both teams are coming off different results against the same opponent. Colorado rallied from a 15-point first-half deficit to defeat Oregon 82-78 at Eugene, Ore,. on Tuesday night, while Washington was handed an 84-56 road defeat by the Ducks on Sunday.

The Buffaloes (13-6, 5-4 Pac-12) lost three of four entering the Oregon game but made 58 percent of their shots in the second half and held on despite a few turnovers in the closing minutes that gave Oregon a chance.

"It's a great win, but we cannot be satisfied with this. We have to do everything we can to go get a win in Seattle," Colorado head coach Tad Boyle said.

Despite recent defeats, Colorado has shown a higher level of play in close games last week against ranked teams in Southern California and UCLA.

Jabari Walker's 13.9 points and 8.5 rebounds per game lead the Buffaloes in both categories. Colorado also boasts a win over Washington this season, 78-64 at home on Jan. 9.

Conversely, Washington has defeated Colorado five consecutive times at home. The Huskies (9-8, 4-3) had a three-game winning streak before their loss to Oregon and are led by Terrell Brown Jr.'s 20.9 points per game this season.

Huskies head coach Mike Hopkins missed the team's past two games while in COVID-19 protocol, but he was cleared to return for Thursday's game.

Washington's 13 first-half points against Oregon on Sunday were the fewest in a half since the Huskies scored 17 in the second half of a game in December 2017.

"When you get down you just try to find something that can spark them, whether it's trapping, whether it's pressing," acting head coach Will Conroy said, according to the Seattle Times. "Just something to try to get your team going. But I think our offense bothered our defense. When you can't score, you get frustrated. And when you have competitive guys, they try to do it on their own."