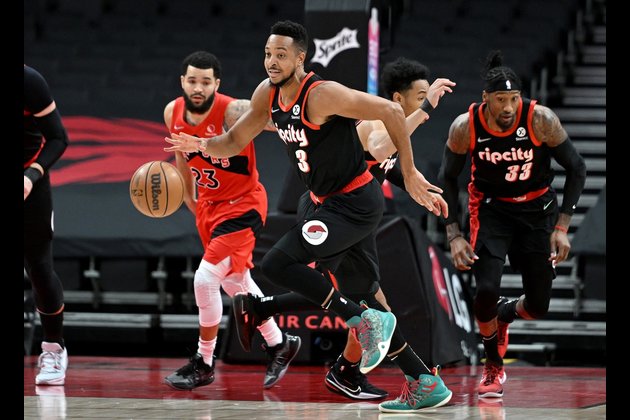 McCollum added 10 rebounds and Ben McLemore had 17 points for the Trail Blazers, who led by as many as 34 points during the first half as they completed their road trip with a 4-2 record. Jusuf Nurkic had 11 points and 11 rebounds.

Portland led by 30 points after the first half and had a 19-point advantage after three quarters.

Nurkic made a jumper to extend the lead to 10. VanVleet's 3-pointer cut the lead to four but Simons responded with two 3-pointers and Portland led by 10, 111-101, with 41.2 seconds to go. Siakam made two layups to trim the lead to six but Covington made one of two free throws with 26.5 seconds to play.

Portland led 33-15 after the first quarter.

Portland scored the first 10 points of the second quarter.

McCollum made a nine-foot floater with 1:03 remaining in the first half to increase the lead to 34 points at 64-30. Toronto's Gary Trent Jr. hit a 3-pointer to end the first half with Portland leading 64-34.

Toronto started the third quarter with an 11-4 surge. Covington's 3-pointer put the lead at 28, but Toronto answered with a 10-2 run. Boucher's 3-pointer with 2:15 left in the third trimmed the lead to 14. McCollum's jumper completed the third-quarter scoring and gave Portland an 86-67 lead.