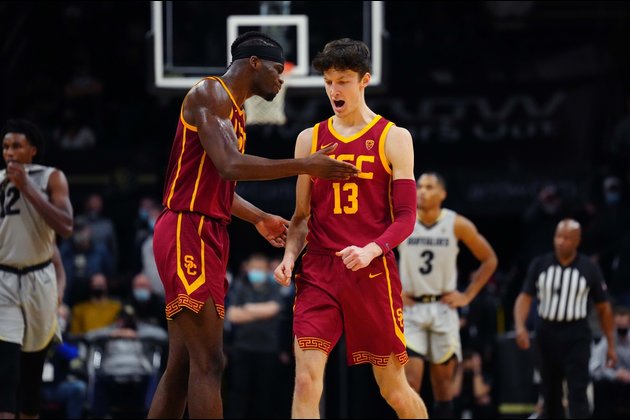 No. 16 USC heads to Utah after much-needed win

Chevez Goodwin, the catalyst behind 16th-ranked Southern California's 61-58 victory at Colorado on Thursday night, had just transferred from College of Charleston to Wofford the last time the Trojans beat the Buffaloes.

The South Carolina native, who transferred for the second time to USC for hissenior season, made all the difference for his new team four years later. It was the Trojans' first win over the Buffs since Jan. 10, 2018, ending a seven-game losing streak to Colorado.

"I knew for a fact coming into this year, I was like, 'I'll be going to Boulder, personally, and I'm going to break that streak right here, right now,'" Goodwin said.

Goodwin will try to help No. 16 USC continue a winning trend on the other side of the Rocky Mountains on Saturday when the Trojans visit Utah at Salt Lake City. The Utes were walloped 93-73 against USC on the road last month.

Despite giving No. 9 UCLA a fight Thursday, the Utes' 63-58 setback to the Bruins was their seventh-straight loss, all in Pac-12 play.

Lazar Stefanovic led Utah with a career-high 18 points against UCLA and Both Gach added 11. They each had opportunities to tie the game late, but Stefanovic missed an open jumper and Gach turned the ball over on an offensive foul to continue the team's woes.

Smith took a positive approach for Utah, which has played its past four games without leading scorer Branden Carlson, who has been out with appendicitis.

"I'm unbelievably proud of our kids," Smith said. "Gave ourselves every opportunity to win. Played a complete game on both ends... And really showed a lot of tenacity."

At Colorado on Thursday, Goodwin led the charge against the Buffs by scoring all of his 14 points in the second half and hauling in 18 rebounds. Isaiah Mobley totaled 13 points and six rebounds, while Max Agbonkpolo hit three key free throws down the stretch and contributed 11 points.

USC coach Andy Enfield admitted Goodwin "didn't play very well" in the first half when he missed all six shots with two turnovers.

"So he made his mind up in the second half to come out with the energy and he was terrific - get 18 rebounds, seven offensive, and just dominate the paint," Enfield said.

A positive result was important for the Trojans, who tumbled 11 spots in the AP Top 25 Poll after losses to Oregon and Stanford.

"You don't like to lose too many in your league," Enfield said. "Three out of four (losses) would have been hard for us. But this was a big win."